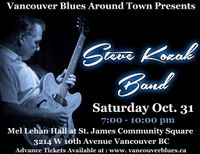 When it comes to tasty West coast blues guitar, Kozak’s name is at the top of the list in this nation -- just ask greats like Duke Robillard and James Harman who have shared the stage with this gifted bandleader, instrumentalist, writer and singer.

Backed by his some of Vancouver’s top musicians Kozak has built a reputation as one of Canada’s premier Blues acts and is known as the go to guy in Vancouver for the west coast Blues sound.